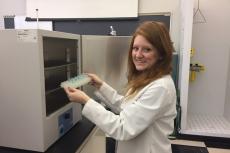 Each year the Geology Program offers more than $42,000 in scholarship support to qualifying UL students

Chicxulub impact tsunami megaripples in the subsurface of Louisiana

A Tectonic Shift in Analytics and Computing Is Coming

Two students of the School of Geosciences were among the six finalists for the University of Louisiana at Lafayette’s Outstanding Master’s Graduate award. 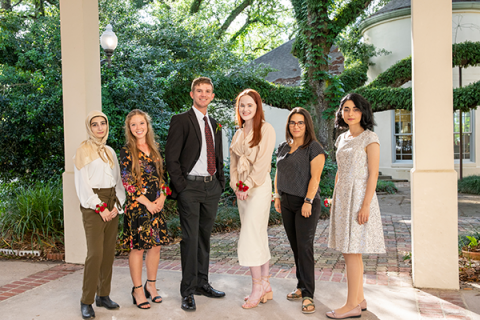 Bárbara Almeida is pursuing a master’s degree in geology. Her GPA is 4.0.

As part of one key research study, she analyzed samples of fossilized wood more than 5 million years old that were collected from far northeastern Siberia. Findings showed that elevated CO2 levels millions of years ago caused substantial warming in the Arctic, resulting in a more moderate climate than today.
Almeida presented that research virtually during last year’s meeting of the American Geophysical Union, the largest yearly gathering of geoscientists in the world.
She is a member of many local and national geoscience organizations, including the University’s student chapter of the American Association of Petroleum Geologists. She served as the chapter’s vice president and social chair.

Almeida earned a bachelor’s degree in geology and natural resources from the Universidade de Lisboa, Portugal, in 2018.
After graduation from UL Lafayette, she plans to work in academia or industry in Europe as a geochemistry analyst.

Nina Zamanialavijeh is pursuing a master’s degree in environmental science. She has a 4.0 GPA.

Zamanialavijeh has conducted extensive research in areas such as terrestrial mega-landslides and rock magnetism. In August, she traveled to Utah, where she collected rock samples as part of research for her master’s thesis.
She is a member of the Geological Society of America, which awarded her a graduate student research grant.
Zamanialavijeh has also conducted remote sensing research at the University’s Regional Application Center. Satellite and remote sensing imagery gathered at the center is shared with governmental agencies, the military and the public for emergency response, coastal restoration, transportation, industry and farming.

She earned a bachelor’s degree in geology from the University of Hormozgan in Bandar Abbas, Iran, in 2011.
Following graduation from UL Lafayette, she is considering several doctoral programs in the earth and energy sciences.